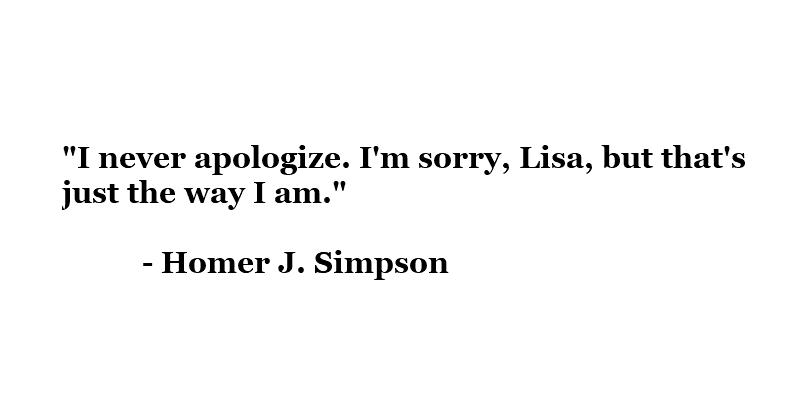 “Joseph, you apologize to Thomas like you mean it.” It’s an admonishment I vividly recall some 50-plus years after my fourth-grade teacher directed me to express my regrets for punching a classmate. I had already muttered “I’m sorry,” but that wasn’t cutting it with Mrs. Barachini. I dug an adverb out of my vocabulary, saying “I’m REALLY sorry, Thomas” to get me out of a one-way ticket to the principal’s office.

(Post script – I wasn’t sorry. Thomas was a jerk and deserved that knuckle sandwich.)

My post script is the rub – “rub” being a phrase first used by Shakespeare in Hamlet, but there I go digressing again. My point is that a stack of adjectives or adverbs are often used to strengthen the sincerity of an apology.

Consider that within the past month several public officials were caught with their hands in the racist action cookie jar – see Ralph Northam and Bill Lee for details, maybe with a side of Mark Herring – and all cracked open the nearest thesaurus to make sure everyone knows they’re really, really sorry. Northam said he is “deeply sorry.” Herring used a double-deeply for his mea culpa, while Lee said he has come to regret his actions.

Using an adjective to modify a noun is a grammatical practice that has roots in Latin; it is an adjectīvum or additional noun. The use of said modifiers by politicians and one hot-headed fourth grader is described as predictive usage, in that they modify and – basically – strengthen the noun. The use of the double adverb by Herring may have changed the second “deeply” into an adjective, but let’s not go down that rabbit hole (Lewis Carroll, Alice in Wonderland. Stop Googling it.). An adverb’s function is to limit or extend the significance of a verb. Its Latin roots come from adverbium, literally “that which is added to a verb.”

How effective adverbs and adjectives are at enhancing the sincerity of one’s regret is left to the recipient of the act. Mrs. Barachini believed me. Thomas, meanwhile, punched me in the back of the head the next day when no one was looking.

Joe Diorio is a writer living in Nashville, Tennessee. You should tell your friends and colleagues about him