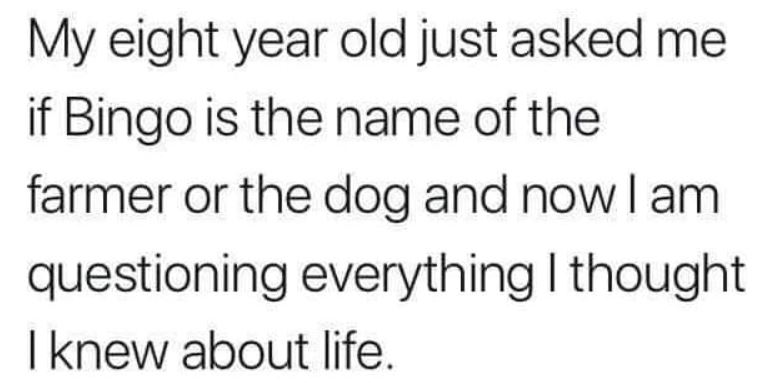 I chuckled when I read the above internet meme about this song. Then I became dismayed when I asked a few people about it and found little consensus.

“‘Who had a dog’ is a parenthetical statement, no? So maybe the farmer IS named Bingo,” said more than one colleague.

To clear this up I did what everyone does: I asked Google.

That was a bad idea. Online forums like seebs.net and reddit.com offered discussion, and a few pop-up advertisements for managing a barking dog, but no real answer. Therefore my next step was to take a deep breath, dig deep in my memory banks, and diagram the sentence.

Diagraming a sentence represents basic grammar tactics. Identify the elements of the sentence: nouns (farmer, dog, name, Bingo), verbs (had, was), pronouns (his, who), adverb (there), conjunction (and), articles (a). Then lay things out on a horizontal line – subject, verb, direct object, with adjectives, prepositional phrases, and conjunctions on angled lines below – to show how they flow in the sentence. The first thing you discover doing that is the subject of the sentence is the farmer, the dog is a direct object, and Bingo works as an adjective to modify the direct object.

The result is that the dog’s name is Bingo. Email me if you want to see my diagram.

Besides, everybody knows the farmer’s name is “Old MacDonald,” E-I-E-I-O.

Earlier this summer the Associated Press decreed that compound modifiers no longer require a hyphen if the modifier is commonly recognized as one phrase and if the meaning is clear and unambiguous, as in “first quarter touchdown” rather than “first-quarter touchdown.” If Twitter is any indication, the change was not well-received (well received?).

Welp, the people have spoken, and the @APStylebook listened. In a September 25 tweet it said “… upon further reflection and thanks to your feedback, we’re reversing that decision.” That’s a fourth-quarter comeback, for sure.

The rules of punctuation are bound to start arguments. For my part, I firmly believe that every time someone does not use the Oxford Comma, a puppy dies. But there I go digressing again.

Mark Twain was often criticized for his use of punctuation. In The Autobiography of Mark Twain he said his punctuation is “the one thing I am inflexibly particular about … it’s got more real variety about it than any other accomplishment I possess.” Rumor has it he also once wrote something, leaving all of the punctuation marks in the footnotes for the reader to sort out. Scholar Cecelia Watson, author of Semicolon: the Past, Present, and Future of a Misunderstood Mark, wrote that she attempted to find the story that is missing punctuation, but couldn’t. Still, reports of Twain’s antics are not highly exaggerated.

Joe Diorio is a writer living in Nashville, Tennessee.