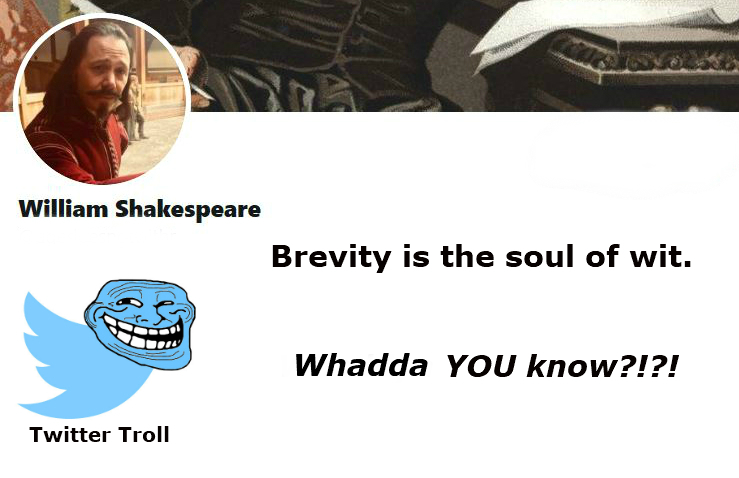 Brevity in writing is not always a virtue.

Example 1: Opponents of the Oxford comma ranted on Twitter recently over usage that appeared in a Vogue magazine headline, “Cardi B on Raising Her Daughter, Bernie Sanders, and Coordinating Outfits.”

“I cant believe cardi b named her daughter bernie sanders” (sic), one person wrote, thoroughly ignoring the rules of punctuation and capitalization. “Look what your precious Oxford comma did this time, nerds,” said another.

With respect, both individuals are wrong. If I write, “My daughter, Hannah, and Chelsea rented a house in Pensacola, Florida,” then one might mistakenly think my daughter’s name is Hannah. But if I add a sentence, “The three of them had a good time,” then you know my daughter is not named Hannah. The problem is not with the Oxford comma, but with a lack of enough detail.

Example 2: The subhead on The New York Times October 17, 2019 story about the death of U.S. Rep. Elijah Cummings read, “A son of sharecroppers, he fought tirelessly for his hometown, Baltimore, and became a key figure in the investigation of President Trump.” In this case, “Baltimore” is intended to be a parenthetical statement, but one could confuse the headline to be saying that he fought for two cities – his hometown AND Baltimore. This could easily be cleared up by saying “…he fought tirelessly for his hometown of Baltimore …”

Brevity is always good, but there can be exceptions. It is especially bothersome in social media. There, brevity often breeds snarkiness rather than insight.

That’s not just opinion. A study conducted by researchers at the University of Pennsylvania’s Annenberg School for Communication suggests longer tweets – 280 rather than 140 characters – breeds civility.

Professor Yphtach Lelkes and his team analyzed tweets from before and after Twitter implemented the increased character limit to 280 in 2017. They concluded that the average quality of conversation improved.

They defined quality as an ideal form of political debate, evaluating tweets for clarity, polite language, justification of opinions, and the use of facts or links to more information. They also evaluated whether users exchanged ideas rather than simply shouting insults at each other. It seems that the increased tweet length let people explain themselves; they could be more deliberative, polite, and civil.

Professor Lelkes says his findings might not apply across all social media. Facebook isn’t Twitter, he notes, and there are too many differences amongst various social media outlets. He’s using a grant from Facebook to study how different aspects of technology lend themselves to different conversations and actions.

CNN’s Chris Cuomo tried a joke that fell flatter than a pancake recently. At a CNN LGBTQ town hall U.S. Senator Kamala Harris said her pronouns were “she, her, and hers.” This is a nod to the fact that non-binary individuals will use the plural pronouns “they, theirs, and them” in singular usage when referring to themselves.

Cuomo tried making light of Harris’ statement and said “she, her, and hers? Mine, too.”

First, please know that there is nothing new about using the plural pronoun “they” for singular usage. Emily Dickinson was doing it over 100 years ago. Second, identifying one’s personal pronouns is not some trendy idea. I participated in seminars on this topic whilst working at Vanderbilt University, where I learned this is a way to show respect toward others.

To his credit, Cuomo apologized for his gaffe. And, yes, “his” is indeed one of Cuomo’s preferred pronouns.

Channeling my inner Ask Abby, it is perfectly acceptable when meeting someone to not only say what your preferred pronouns are, but to ask the individual what theirs are as well.

A moment to brag

Last month a faculty member at Saint Joseph’s University asked if he could use my newsletter in his intensive writing class. Besides being flattered to the hilt, I think I left skid marks saying “yes!” Nothing beats having your work recognized by academia.

I sincerely appreciate all the feedback I receive. Please don’t hesitate to let me know what you think of A Few Words About Words.

Joe Diorio is a writer living in Nashville, Tennessee.

One thought on “Brevity, the path to confusion”